A Desperate Place by Jennifer Greer 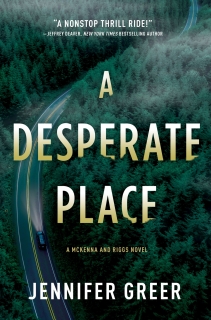 Three separate homicides. Three unrelated victims. One grisly secret.
When the body of famous actress Niki Francis is unearthed from its shallow grave, the small town of Medford, Oregon is alarmed, but not shook. After all, there should be plenty of motives and suspects—Niki had fame, wealth, looks. The kill was targeted, premeditated, and it’s about her celebrity. Or so they thought.

Whit McKenna is licking her wounds, working as a reporter for the local Medford rag. Fresh from a harrowing assignment for her previous post at the L. A. Times which cost her her husband, Whit must pull herself together for the sake of her two daughters. The wound has hardly begun to scab when she’s called to cover the murder, so she teams up with her best friend, medical examiner Katie Riggs. Then two more victims turn up, completely disconnected from one another, and McKenna loses all hope of a breakthrough. Rather than clarity, the possible suspects and motives become scrambled. But time is running out, and each front page article McKenna writes brings her closer to a killer who will stop at nothing to realize a deadly vision.