A Death in East Berlin by Richard Wake 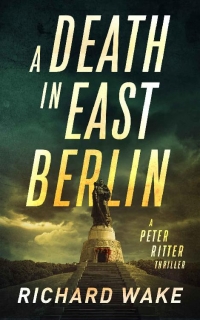 Peter Ritter is a detective on the East Berlin murder squad — the youngest detective they have, really too young to have been hired but too well-connected to be fired. And in the weeks before the Berlin Wall is to be built, he is called out in the middle of the night to a macabre murder scene within the Soviet war memorial in Treptower Park.

As his investigation continues, multiple layers of life in East Berlin are revealed: the crisis created by the steady stream of men and women fleeing the East through the city of Berlin; the infighting and the power-grabs among the leaders of the Communist government; the fear engendered by the secret police, known as the Stasi; and the daily hardships and dreams of East Berliners who live a mere subway ride away from the West. And through it all, Ritter simply seeks the truth — about the murderer of his victim, and about his own feelings about his place in a Communist country in turmoil.