A Darker Reality by Anne Perry 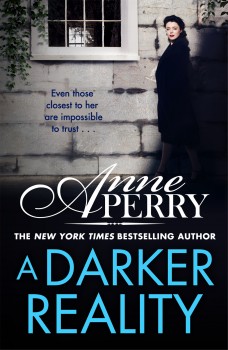 The third novel in Anne Perry’s breathtakingly tense and exciting spy thriller series, featuring young British photographer and secret agent Elena Standish, set in the 1930s when the world was a place of increasing fear and uncertainty…

Spring, 1934. With the threat of war looming, political tensions begin to rise…
Elena Standish, a young English photographer who works for British Intelligence, is visiting her grandparents’ home in Washington DC when tragedy strikes. A lavish party is held to mark her grandparent’s sixtieth wedding anniversary and Elena takes pride in capturing the event on camera, but when the beautiful wife of a renowned scientist is found murdered in the driveway, allegedly run over by Elena’s grandfather’s car, Elena’s world is turned upside down.

Arrested on suspicion of murder, Wyatt Baylor protests his innocence, claiming he has enemies who are trying to frame him. But who are these enemies and how can Elena defend a man she barely knows? Turning to secret agent James Allenby for help, Elena must uncover the truth behind the events of that fateful night. But can she trust Allenby or her family and is she willing to risk everything in her pursuit of the truth?