A Dangerous Life by Len Maynard 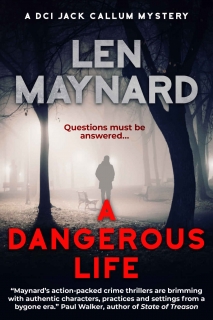 1959. A body of a man wearing theatrical make up is found hanging from a tree on Norton Common in Hertfordshire. He has been tortured and his throat has been cut.
DCI Jack Callum, a veteran policeman with his own rules for procedure, heads the investigation into this puzzling crime. The clues lead him close to the answer, but the solution remains elusive. Why was the man killed? What were the victim’s links to London’s gangland bosses?

When an unsolved murder is uncovered that appears to be connected to the case, Jack realises he must use his team to their full strength to separate the innocent from the guilty.

Jack also faces a challenge he never expected as he is accused of an improper relationship with a young Detective Constable on his team, Myra Banks.
In a breathless climax, Myra puts her own life on the line to deal with a figure from Jack’s past, who has now become a lethal threat in the present.