A Case of Betrayal by Neil Turner 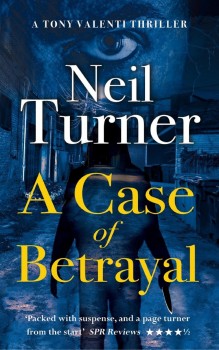 When a woman is brutally slain in a crime with no witnesses, suspicion immediately falls upon her ex-husband. But should it?

As the evidence against him mounts, the suspect’s brother—a friend who recently helped save Tony’s father’s life—turns to Tony Valenti for help. The case is a bewildering maze with multiple suspects and a mountain of contradictory evidence that points both to and away from his client. What is the truth? Even Tony isn’t sure of his client’s innocence.

Tony is already overwhelmed by a case in which nothing is as it seems when a lethal terror from his past surfaces to shake his faith in himself… and to threaten those dearest to him. Suddenly in a desperate race to find the truth of the crime and to protect himself and his family from a mortal threat, Tony fears that he’s in danger of being pulled in too many directions to save anyone.