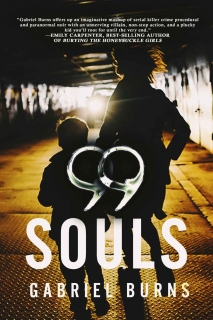 Ninety-nine bodies have been found dead worldwide with “God is Blind” burned into their torsos. When Sarah Winslow’s eight-year-old son, Brandon, is abducted by a man who bursts through her door in an explosion of light, she is terrified that her son’s kidnapping will bring the total to one hundred. Reflecting on the man who took him, she realizes she’s up against something more terrifying than a serial killer; she’s up against something supernatural.

The police suspect Sarah killed her son and that the abduction story is an attempt to conceal her crime. When they try to arrest her, she takes off on her own, desperate to find her son before it’s too late. But if Brandon was taken by something supernatural, why? What does it want? And is his abduction connected to the “God is Blind” murders?

Nothing in-or outside-the world will stop Sarah’s quest to find her son.